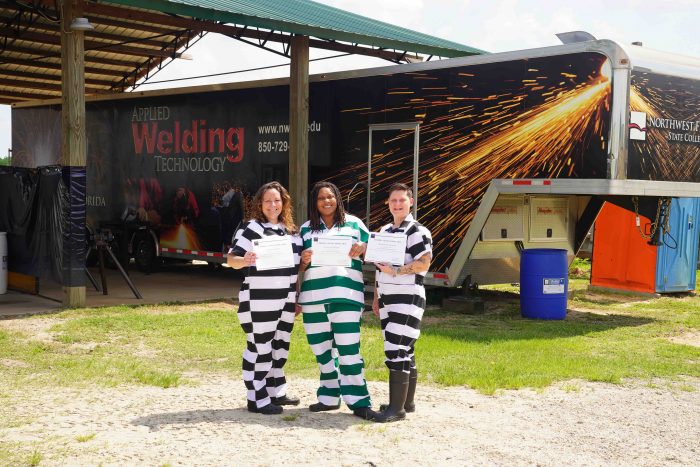 “It was a little bit of what I expected plus a little more,” said Grindstaff. “I have a construction background already so this was something that was in the industry that I can take further with me.”

Pending her release, Grindstaff said she plans to continue her welding credential at Northwest Florida State College in the fall.

Classmate Shauna Gilbert said that for her, this credential helped to expand her education and keep her focused on something constructive during her time in the Walton County Jail.

“On the outside, I have an IT bachelor’s degree, so any opportunity to get a certification while I’m going through a tough time in my life was very welcomed. I thought this would be something that I could use in conjunction with my IT degree – maybe robotics welding or something like that.”

NWFSC Program Coordinator for Workforce Welding, John Greenhalgh said that he is proud of this first all-female class for forging the way for future students.

“This was quite possibly, the easiest class I’ve ever taught,” said Greenhalgh. “They were a truly wonderful class. Goes to show the world – especially with a lot of preconceived thoughts – that women are just as good, if not better, than men in the welding world.”

The inmate welding credential program partnership between NWFSC and Walton County Sheriff’s Office began in 2018 and has produced approximately 52 graduates over the past two years. After gaining their 240-hour credential, inmate graduates are able to continue their welding credential at NWFSC when released.