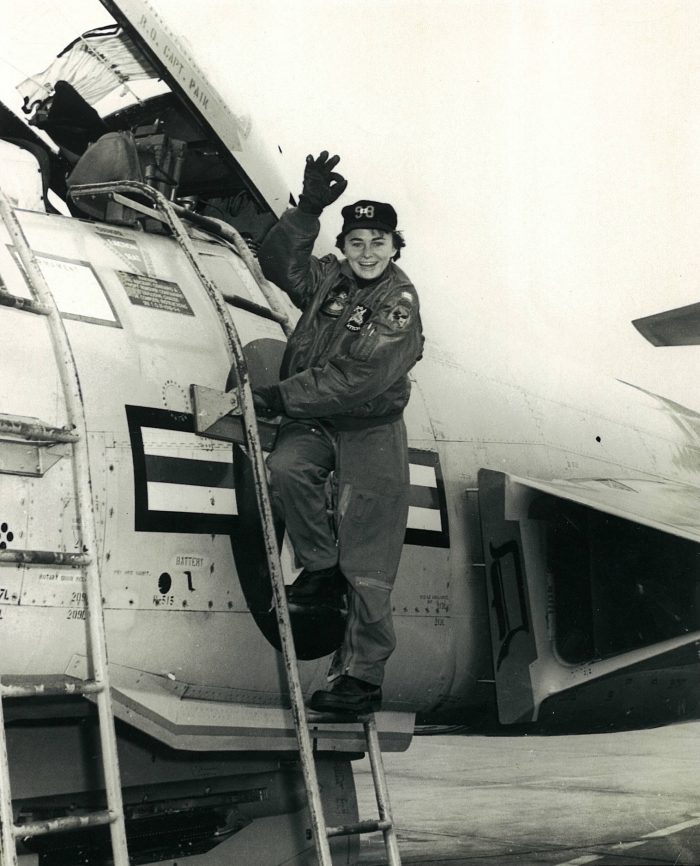 Dottie Blacker loves a challenge.  Nearly 21 years ago her first gift to Northwest Florida State College  was a $100,000 “challenge” to encourage raising funds to build a visual arts center.  Her’s was the lead gift and the catalyst for starting construction.  Since that time, Dottie has provided nearly $800,000 in support for various programs at the College.  From visual arts, to science development, to first responder training, circling back to the performing arts, Dottie’s generosity is evident, and visible in many cases, throughout the Niceville campus of Northwest Florida State College.

The impetus for her most recent gift of $40,000 to the Aviation Center of Excellence, located in Crestview, stems back to a passion and a challenge in early adulthood.  Having completed two-and-a-half years of college in Enid, Oklahoma, she excelled as a legal secretary but was tired of working hard to pay expenses on a seventy-five cent hourly wage.  She discovered that American Airlines was interviewing stewardess applicants.  She borrowed a car, drove to Tulsa to interview and was hired at 20 years-old, just barely meeting the height requirement of 5’2”.

Stationed in Tulsa, she flew in DC-6s and DC-7s (pre-jet) round trip to New York with a stop in Nashville or to Los Angeles with a stop at Love Field, Texas.  There were usually 50 passengers on board who enjoyed big seats, plenty of legroom and space for luggage.  Two stewardesses served free cocktails and full meals, complete with a pack of cigarettes.  She had plenty of time to chat with passengers and spent as much time as possible observing the inner workings of the cockpit.

Eventually, she married a college boyfriend who was a medical student at Tulane University in New Orleans.  He enlisted in the Air Force his final year of medical school and that, as she puts it, was the start of their great and unusual adventures.  They moved to San Antonio where her husband did a one-year internship at Lackland AFB and she worked as a secretary for Southwest Research Institute.  They both joined the Lackland AFB Aero Club and signed up for flying lessons.  Dottie’s first instructor was very low key and calm.  After about four hours of instruction, the club assigned her to another instructor who was tough and gave her fits.  A fellow AERO Club member told her later that the switch was meant to encourage her to abandon her dream of becoming a pilot.  “Females just aren’t meant to be pilots, her colleague informed her.  Never one to shy away from a challenge, Dottie persevered and passed the written and flying FAA exams on first try, earning her ticket (license) in record time.

When the Aero Club celebrated it’s first female pilot, the San Antonio evening news sent a photographer to film her taking her husband for a ride.  In those days it would normally have been the husband taking his wife for a flight.  She and her husband enjoyed many more hours of flight and as civilians owned a Piper Cherokee until they moved near Los Angeles where the air traffic was too heavy for the light aircraft.

When Dottie, now living in Kansas, read about the new Aviation Center of Excellence at Northwest Florida State College, she was immediately inspired to support her “favorite college” with a gift of $40,000 as a way of celebrating her treasured memories.  “Dottie is one-of-a-kind and we are so grateful for her continued support,” said NWFSC President Dr. Devin Stephenson.  “Her gift to this transformational program will help provide a source of opportunity and excellence for residents of Northwest Florida for years to come.”

The Aviation Center of Excellence will serve as an incubator for aerospace and high-tech industry careers. Located at the Crestview Technology Air Park, Northwest Florida State College will prepare students to earn degrees in Professional Pilot Technology and Unmanned Vehicle Systems Operations along with industry-recognized credentials in Aviation Airframe and Powerplant Mechanics. The Aviation Center of Excellence is a public-private venture providing industrial lab space, hangars and classrooms to meet area training needs. Collaboratively with the Hsu Educational Foundation, we are committed to inspiring and preparing a strong pipeline of students to seek and take advantage of these high demand aviation training opportunities that lead to promising careers, a strong source of local workforce talent and a bright economic future for the region.

For more information about the Aviation Center of Excellence or aerospace technology programs being offered at Northwest Florida State College, please contact Dr. Michael Erny at (850) 729-6051 or ernym@nwfsc.edu.